Women In Football – Sneak peak: ‘Kick it like Lira’ – setting the base right

On what’s ahead in 2019, particularly one event shines on the horizon: the FIFA Women’s World Cup 2019 taking place in France. Women’s football has recently gained in popularity and participation. But we have not reached our goal yet and will continue to challenge stereotypes and demand respect for women in soccer. Together with Equal Playing Field, DISCOVER FOOTBALL, Women Win, Global Goals World Cup and all the other great organization fighting for the United Nations goal number 5. Going this direction, I intend the exhibition “Kick it like Lira” focusing on girls and women playing football in Baden-Württemberg. It shares a familiar story to many of the World Class players who fought against the odds to make it where they are today. It is a tale about a journey of girls who overcome many obstacles to fight for change in the way female football is perceived – and about their individual motivation strengths and successes. It therefore aims at the visibility of girls and women playing football beyond the sexualized images portrayed in media. With an emotionally charged photo and video documentation, multi-faceted storytelling including a social media campaign, the project sets out principles to support the empowerment of women in society and to promote gender equality.

Women’s football – No longer smiled at but taken seriously

Times have changed. Women’s football was forbidden at the DFB (German Football Association) until 1970. A different time with certainly a lot of prejudice; especially as far as the understanding of roles between men and women was concerned. Hence the thought that certain sports, including football, can’t be for girls because you have to protect them. This protective being has been taken to absurdity over time. More and more people have been convinced by the good performances of women, and today there is in fact recognition for the performance of women and girls in football. We like to look at it because it has its own aesthetics. It’s not the same as men’s football, and it doesn’t have to be. It’s powerful and energetic, and at least as entertaining. Women still have to go the so-called extra mile. This was demonstrated by the two world records “From Kilimanjaro to the Dead Sea” set from Equal Playing Field: International female footballers won recognition with the highest and the lowest games on earth. The Kilimanjaro also represented the invisible mountains that the athletes had to climb in their careers.

It is also my intention to encourage women and young girls to believe in themselves. From my own experience, I know that football not only fascinates, but also strengthens self-confidence and pushes personal boundaries. In terms of team spirit football connects, regardless of what level you play. Within this framework, my project accompanies amateurs and one professional team on their way to the top. Our plan: a multimedia touring exhibition in Baden-Württemberg, and a kick-off event right at the beginning of the Women’s World Cup on a central square in Heidelberg. The message: despite differences, football can unite. 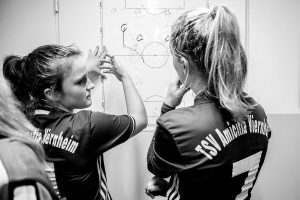 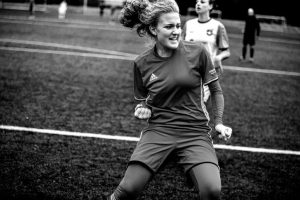 There’s something about football that just draws you in. I’m a big believer of ‘just because things always have been done in a certain way, doesn’t mean they have to be done in that ways in the future’. Looking or playing different should not be a barrier. I believe we have a responsibility to encourage other women, and that supporting each other is important. It’s been a case of making football more an equal environment because there are so many talented women out there. There is still a way to go, because we can’t change people’s perceptions over night. The number of viewers and listeners who feel completely normal for a girl to play has already increased. But still: The average number of spectators even for Bundesliga matches is still far lower for women than for men. And obviously the assumption of knowledge isn’t the same. It is going to take a change but it’s changing already. If the first chapter sets the base right, the attention for the succeeding story is drawn. Stick around!