And suddenly on stage with U2 …

The attraction of a good deed: Female footballer is honored by Bono in a U2 song after playing a spectacular match on the Kilimanjaro 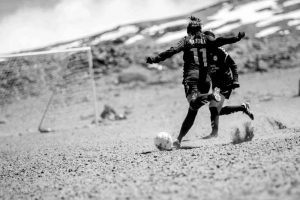 Kicking at an elevation of almost 6000 meters: A very special kind of exhilaration. A legal high that – in the truest sense of the word – can only be topped by very few other experiences. I.e. a concert by a band that is worshiped by its fans with a cult of reverence: U2. Time and time again, Bono, The Edge & Co., manage to convey a sense of pleasure with groove and goosebumps in a holistic experience.

What do pinnacle Football and U2 have in common? More than anyone thinks. It involves women: On June 24th, 2017, approximately 30 female players from 24 countries made history and set a record by playing a football match on the Kilimanjaro, the highest mountain in Africa. On this mountain, neither stadiums nor streets have a nam 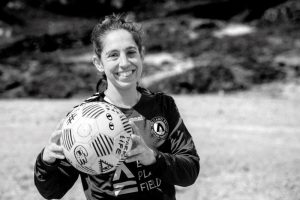 e. The game and the underlying ‘Equal Playing Field’ initiative potentially caught the attention of the Irish rock stars. Either way: The match – more precisely, the player Josefina Martorell – was actually mentioned by U2 in a song, which the band performed on stage in Buenos Aires in October 2017.

It happened on the rooftop …

How it all happened: The song honors remarkable women and their accomplishments. Someone from the band had heard about the performance on the rooftop of the black continent – and perhaps remembered a particular concert on the rooftop of a building in New York. And before she knew it, Josefine received a written request by post: Would she agree to the inclusion of her photo and her name in the U2 song?

She agreed. And it happened: Not only Mother Theresa and other female icons but also Josefina was amongst those women being extolled (and illustrated in the picture on the stage). A great success – also almost certainly for Josefina, but primarily for the cause of women.

Spontaneous – guaranteed without any hidden agenda

Is this just a nice mention? Not at all, because it shows that a social commitment by no means must be based solely on hidden marketing agendas or ego trips – an allegation that Bono, Sir Bob Geldorf & Co. face again and again. The spontaneous inclusion of a more or less unknown activist and female footballer in a U2 song, which is played live in front of thousands of fans, actually shows how significant ‘Equal Playing Field’ really is. Moreover: It is very touching.

Hence, the moral of the story could be as follows: It takes something very unique to ultimately be on stage with U2. But this is not actually the point! This rather demonstrates once again that solidarity has hardly any borders – not even the fact that generally speaking, women’s football on Kilimanjaro and U2 have almost nothing in common. Except for one aspect: Both can inspire and attract an increasing number of people.