“Playing football prepares you for life!” 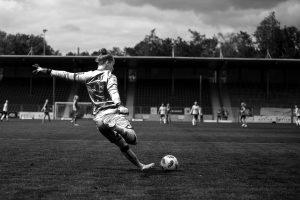 Friederike Abt is originally from Bielefeld, North Rhine-Westphalia. When she was about 6 years old, a friend of her introduced her to football — and her passion for life was found! Her family members played handball, for a certain time she has also tried, to be successful in both. But one day her mum told her to choose between both sports! Because it was too much time and effort to have one’s cake and eat it, too. So, Rike stopped playing handball when she was 7 years old. From this decision on, the football goal started to be her second home on the field.”

What doesn’t kill you, makes you stronger!

This was the mental part of the situation she was in: Football sport has always been a masculine domain. So, due to the lack of girls, she had to play with boys since she started with football. At the beginning it was hard from time to time, but it gradually led her to a state of mind in which she felt quite empowered. She developed strength and learned to assert herself.

And there were also the physical components: She had to deal with the embodied superiority of guys, who were also much older than Rike. These facts also shaped her a lot — both, as a football player and as a person. When she was 10 years old, she joined a team, where all the girls were 3 or 4 years older than her. But even then, they still had to play against boys, because there were not female teams to build up an own league.”

When Rike was 17 years old, she had to deal with a rupture of cruciate ligament. After a break of 7 months, she started to play again for the second team of the SV Herford. But after 3 games, she suffered the same injury again. So —excluding the 3 played games she participated in — she dropped out of football for 2,5 years overall!  In 2012, she was injured again, but that one didn’t stop her from playing football.

Career for Body and Mind — keeping the Balance…

After receiving the university-entrance diploma, like her older sister, she graduated from the Karlsruhe Institute of Technology with a bachelor’s degree in biology. For Rike it’s very important to have an intellectual compensation to sports, so body and mind can be in a good balance. 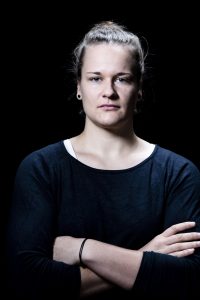 Thinking about an academic career

That’s why she is aspiring to complete her academic path with a master’s degree. She is even thinking about starting an academic career maybe! At Hoffenheim, the female players are all studying — parallel to their football career. Compared to VfL Wolfsburg they focus mostly on the sportive aspects. She thinks, the version of Hoffenheim is quite important for the players. A marginal note here: Wolfsburg gets more financial support. This enables the players to live on their salary and concentrate on football only.

Rike played for the ‘Herforder SV’ a long time. At every game there is the chance to be seen by talent scouts from other football clubs and it is seen as a good opportunity by the players. If you deliver a good performance, they sometimes try to win you for another, higher club. You are never alone with this intention, the whole team is having it, each single player for himself.

Games are revealing a second Character

So, every game is revealing its second character — as a competition within your team. In 2015 Rike was able — via that way — to make it to TSG 1899 Hoffenheim. Recently she had to decide between SC Sand and VfL Wolfsburg. She has chosen Wolfsburg. It’s cool: She was very excited about this new chance and change!

Her Life after Football!

Many football players aspire to become the managers of great soccer clubs: They are seeking for fame and success, in Rikes opinion. That’s not what she is up to. She rather would prefer working as a goalkeeper coach. And she also wants to try other types of sports out, she loves challenges — maybe one day she will run a marathon!

In the masculine football world, it’s mostly about money, fame and power. The games are affected by tactics and dives — too much of it, totally overdosed. Sometimes their hair styles and shoes seem much more important than their football performance itself. Rike think, that’s funny, because this is rather a female cliché, being vain.

Soccer Worlds are upside down!

But not in soccer, imagine that: Woman are working hard, kicking it and are studying, while the guys are thinking about their look on the field! Soccer worlds are upside down, somehow! Therefore, Rike hopes that female football will get much more positive recognition in the coming future. In her opinion, girls are great fighters on the field — but still, many people are laughing about them. Telling them, that female football would be no sport which can be taken seriously. Something they will prove them otherwise.