The joy of playing football can nobody take away but you!

Growing up sheltered
The first chapter of her life began in the southern part of Germany. Pia grew up in Kochel am See. It’s close to the alps and therefore very idyllic with beautiful landscapes. In 2001 her family  moved to Mosbach, where she went to school and graduated with the university-entrance diploma in 2012. Pia started academic studies in ‘media and communication sciences’ at the university in Mannheim. Because it was too stressful for her driving from Mosbach to Mannheim every day, she moved to the city she studied in. 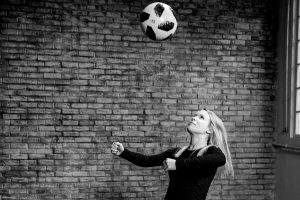 Pia’s older brother is 2 years older than her. He has already played football when the family still lived in Bavaria. She always accompanied him, but hasn’t played herself. Not until they’ve moved to Mosbach. Then she started with 2 other classmates, girls, to play in the minor league of the FC Mosbach. But the others soon lost interest in playing football and Pia didn’t want to play solely with boys. So, she stopped playing football until she was around 16 years old. Pia started to stand on the field again when the VfK Diedesheim formed a girls-team.

To her many stops lead to the goal
After Pia moved to Mannheim, she started to play for the TSV Amicitia Viernheim. In 2015 she graduated from university with her bachelor’s degree. Luckily, she got an internship at the press office of the football association in Baden. For this job she moved to Karlsruhe, but still continued to practice in Viernheim. Every week a long drive from Karlsruhe to Viernheim and back (after her car broke even by train). Seen in retrospective this was totally crazy, because one way is 70 kilometres. But Pia was already dedicated to this sport, so she accepted the distance. 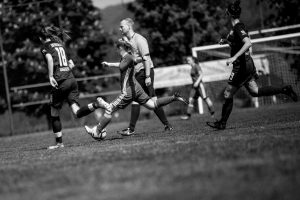 Leaving and coming back
At the beginning of 2016 she started to work as spokesperson for the TSG Hoffenheim women’s team. For this job she moved to St. Leon. In the same year she got the feeling of not getting enough appreciation for the effort she has put in the team. So, she started to play for SSV Waghäusel in 2017. But this wasn’t her key to happiness as well. After they ascended to the next level, the team had many away games. This, and the fact that her heart was still attached to Viernheim, made her to go back to this team.

On the field you get to see the person behind the face
Her fascination about football is due to many aspects of this game. It comprises not only the time you are standing on the field. You are spending time with people when you arrive at the competition, during the breaks and after the match. Often you simply judge about a person’s character just by superficial aspects. It’s possible that you tend to judge a girl by her appearance or the way she behaves. But in the life of football you get close with human beings that are very different and interesting. All of them have different circles of friends, backgrounds and interests. This is always so life-enhancing. Pia could not point at one single teammate, which has not learned to appreciate.

Being under pressure
Standing on the football field is like breathing fresh air to Pia. If she could, she would play every day. Before starting her job at the TSG Hoffenheim, she just missed one single match. She injured herself while colliding with a goalkeeper. Just 2 days later she stood on the field again, but her blood levels dropped heavily, so she missed the game the week after. This incident showed her that you must enjoy every moment, but you still shouldn’t force yourself.

Stay relaxed and focus on the fun bringing aspects
Football is the most important purpose in Pia’s life. But she tries to be more relaxed and keeps herself out of the organizational stuff. She thinks this is an analogy that is good for all other areas in life. You should focus on what let you feel good. But as soon as you do more than you and your body can take you should stop for a moment and do what it needs to reduce the stress. 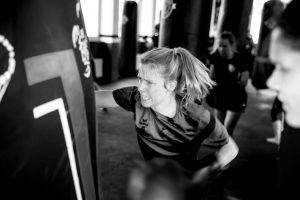 Soccer is not just a hobby, it’s an attitude towards life
Everyone in Pia’s environment would tell you that football and she are inseparable. This sport takes 85% of her time, mostly she can’t tell where the job is ending and the fun beginning, because she is meeting her friends where she is working as well. So, it’s more like getting paid for doing the things you love. She thinks one could say that her heart beats football. If someone would ask her right now what her biggest goal in life is, there is solely one answer: She would love to remain as happy and privileged as she is now.