Our World has become bigger 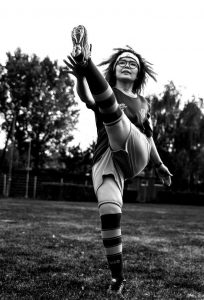 When she played her first game together with men, the men told them to stay at home. But the girls didn’t let that stand. They explained to them that they have the same right to play. Soccer does not belong only to men, soccer is not a man’s game. A week later, they apologized. Khadija was pleased with this success. Because women love to play football, too. Who had the right to say they could not.

In Afghanistan and Iran, Khadija never thought about playing soccer. She was taught that it was a male-only sport. At the end of 2015, she moved to Austria. From a friend Khadija hears that there is an opportunity for women to play soccer. That’s how she joined Kicken ohne Grenzen. In training, workshops and further education, her self-confidence was strengthened. For her, everything was new, but thanks to soccer she got around a lot in Vienna. And now, with being able to travel, her world has become even bigger. She would like to play soccer all over the world. She has already been to Cologne and Copenhagen. A lot has changed. Khadija also no longer wears the hijab. But that has only a little to do with soccer. She wanted to look the way she is. And not be looked at differently because of a scarf. Khadija felt that if she wore a headscarf, she would be judged by it. Actually, it should be a personal choice, but in this society, it’s not possible. She was used to wearing the hijab all her life. She was always told that if she didn’t wear the hijab, she would go to hell. But today she finally feels free. She finally wants to live independently. An apprenticeship would be good to have a secure life. In school she was in the technical branch. The technical field is male-dominated, just like soccer. But women also have good opportunities here. And she would like to pursue this way. 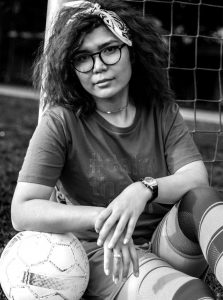 When there are rounds of introductions at school, it’s really nice: Everyone asks you what you do. Then Khadija immediately says: I play soccer! Everyone always thinks that’s cool.

Through soccer and her new friends, she was able to find herself again. That sounds very simple. But it wasn’t. She didn’t know the language, she didn’t know anyone. She felt lost. It’s like being born as a little child again.