Soccer A Possible Path To Freedom

If the history of soccer had been dominated by women, Monica Santino would be on the tip of everyone’s tongue today. Not only because of her strong personality but also because of what she has achieved on the pitch. For the sports journalist and sports teacher, who is now 54 years old, soccer is her life. She sees soccer as a possible path to freedom. Since she was born, Monica fought to break out of norms and become an “anti-princess”. 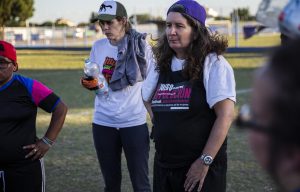 Her first memory, which has to do with happiness, had to do with soccer. She was still a child then. For Monica it was natural to start playing football because she was born into a family that loved football. The family gathering on Sunday consisted of going to the field in Vélez. When she got older, however, she experienced the first resistance to her wanting to play the game she loved from the same people who had urged her to play: her father and grandfather. When her body changed in puberty, it didn’t look so good when playing soccer. She was embarrassed by the looks of others and she suffered. When she grew up, playing soccer no longer fitted into the cultural patterns. But she never stopped playing. At first she was surrounded by men, where she was the only woman on the team playing soccer. Among other things, she played four AFA championships for the All Boys. Later she realized that she liked women. For her this was again a situation of isolation: she saw herself as the only female soccer player, the only woman who liked women. She had no connection to a similar reality back then. She thought she stands alone. But these experiences shaped her. There are several images of Monica. There was a very succinct one, which describes her very well. In the 90s she stood in a leather jacket and tight jeans on the Plaza de Mayo with a sign saying: “Our free sexual choice is a human right”. She actively participated in the human rights movement CHA (Argentine Homosexual Community). In all of them there is the Monica who rebelled. The girl who, despite studying at a private nun’s school in San Isidro, struggled to play soccer. The lesbian who fought to become what she wanted when her family found out she had a girlfriend and kicked her out of the house. She did not follow the family into politics. She studied sports education and sports journalism. (Find more here) 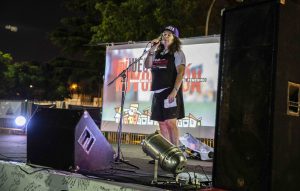 Monica has supported La Nuestra Futbol Femininista from the beginning. On the field where La Nuestra girls and women play, they don’t want to play with dolls: They want to kick balls into the goal. Santino has been fighting for girls and women’s rights for a long time. With La Nuestra she is building a network, teaching girls and women about their rights and encouraging them to oppose male violence and early pregnancy. The desire for a freely determined life, common ideals. The fight against oppression and the desire to be together brings them all together. Standing together as heroines in the square is the easiest way to be together. She affirms that what they do is not charity: She has chosen soccer to change the reality of the neighborhood. They need support from the state to give the project more leeway than before. They want to be paid for their work. Which is not the case today. All women have to earn their living with another job. But their immeasurable love for soccer, and the bond they have with the girls, lets them continue La Nuestra. They play the football they like, there are more and more of them – the community is growing.In the meantime their work is also being taken up by the government. They have been resisting for years, without giving up any principles, and exchange ideas with organizations in the neighborhood, going out onto the streets together. 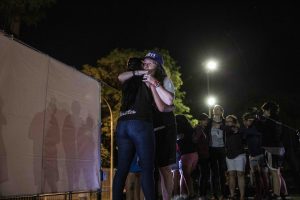 “I think it is very important that women’s football becomes more visible, but you have to have a lot of courage to take this step forward. I think the key is more feminism, more gender-conscious players, and it is not enough to just play the ball, but to consider a slightly higher level.

Women’s football has caused a crack in the wall of sexual hypocrisy in men’s football. There is still a long way to go for women, the issues of diversity in sport are very complex and still unresolved. Sport is thought of in very binary terms, and football in particular is a place where what is considered male and female is constantly put under stress. There are still many prejudices. La Nuestra takes steps to break through patterns of thought. But until they achieve their first successes here, they will continue to open their playing field to as many people as possible. Because sport has a wonderful potential to integrate diversity as part of life.